The Mediterranean has traditionally been a place where men, goods and inventions have passed through. The historian of the Annales Fernand Braudel saw the Mediterranean as "an immense sponge that has slowly become imbued with all knowledge". Within this liquid plain there were several protagonists, on the one hand the Spanish monarchy and the Genoese, in the eastern Mediterranean the Republic of Venice with its colonies of the State da Mar, which was in dialogue with the great enemy of the Christian West, the Ottoman Empire. This new political actor, following the capture of Constantinople (1453), overlooking the Mare Nostrum, began an expansionist policy that involved not only the Balkan area, but also the Mediterranean one. The empire had a feudal composition, with a large number of vassal territories, among these was the Arabian Peninsula. Within this multicultural context, a commercial power such as the Serenissima managed to match its interests in various areas of the Ottoman Empire such as Palestine, despite the religious adversity between the Turks and the Western world. Through the analysis of the Italian sources it was possible to observe what were the relations between the Sublime Porta and the Republic of Venice, the lion, in the Palestinian territory 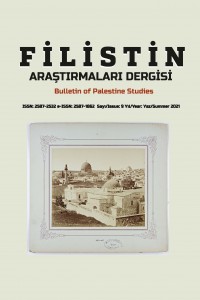